Home Experiences Food Trucks at the Fountains: What to Expect
Facebook
Twitter
Pinterest
Linkedin
Email
The Food Trucks at the Fountains kicked off their 2015 series in March and I was finally able to make it out this past weekend for some Food Truck Fun in the Sun.
First, what is Food Trucks at the Fountain? This is an event that takes place at the WaterWalk Pavilion the last Sunday of the month where Food Trucks from all over the city come park themselves and sell food to the public. The calendar is as follows:
Sunday, March 29 2015 11:30 AM
Sunday, April 26 2015 11:30 AM
Sunday, May 24 2015 11:30 AM
Sunday, June 28 2015 11:30 AM
Sunday, July 26 2015 11:30 AM
Sunday, August 30 2015 11:30 AM
Sunday, September 27 2015 11:30 AM
Sunday, October 25 2015 11:30 AM
Website: http://www.wichitawaterwalk.com/events/waterwalk-event/food-trucks-at-the-fountains.html
Many different Food Trucks will be parked in the area from 11:30 am to 2:30 pm and you can take your family, have some lunch at some of the best food trucks in the city and just enjoy being outside. Unfortunately this past weekend was a bit chilly and windy but that didn’t stop many people from coming to this great little event put on by the WaterWalk.
When you go, you’ll notice many of the popular Food Trucks are there like B.S. Sandwich Press, Let’m Eat Brats and Flying Stove among many others. There were around 10 or so trucks when a friend and I arrived on Sunday. When you go, the quickest option to get through from truck to truck if you’re going that route is cash. I didn’t keep track of it all but some trucks accept cards but cash seemed to be the easiest route to go.
Ideally I would have liked to try every single Food Truck that Sunday. My stomach immediately vetoed that plan and told me that I would be limited to three trucks and then given a curfew of seven pm.; seemed reasonable enough.
The lines for B.S. Sandwich Press and Flying Stove were the longest and seeing as how I’ve already had those before, I wanted to try something new. The first truck my friend and I stopped by was Chino’s Parrilla. There were four items to choose from on their menu but to keep it small and simple, we went with the Pork Verde Taco (roasted pork shredded and grilled in green chili, topped with Cotija cheese and avocado, pico de gallo, over a corn tortilla). 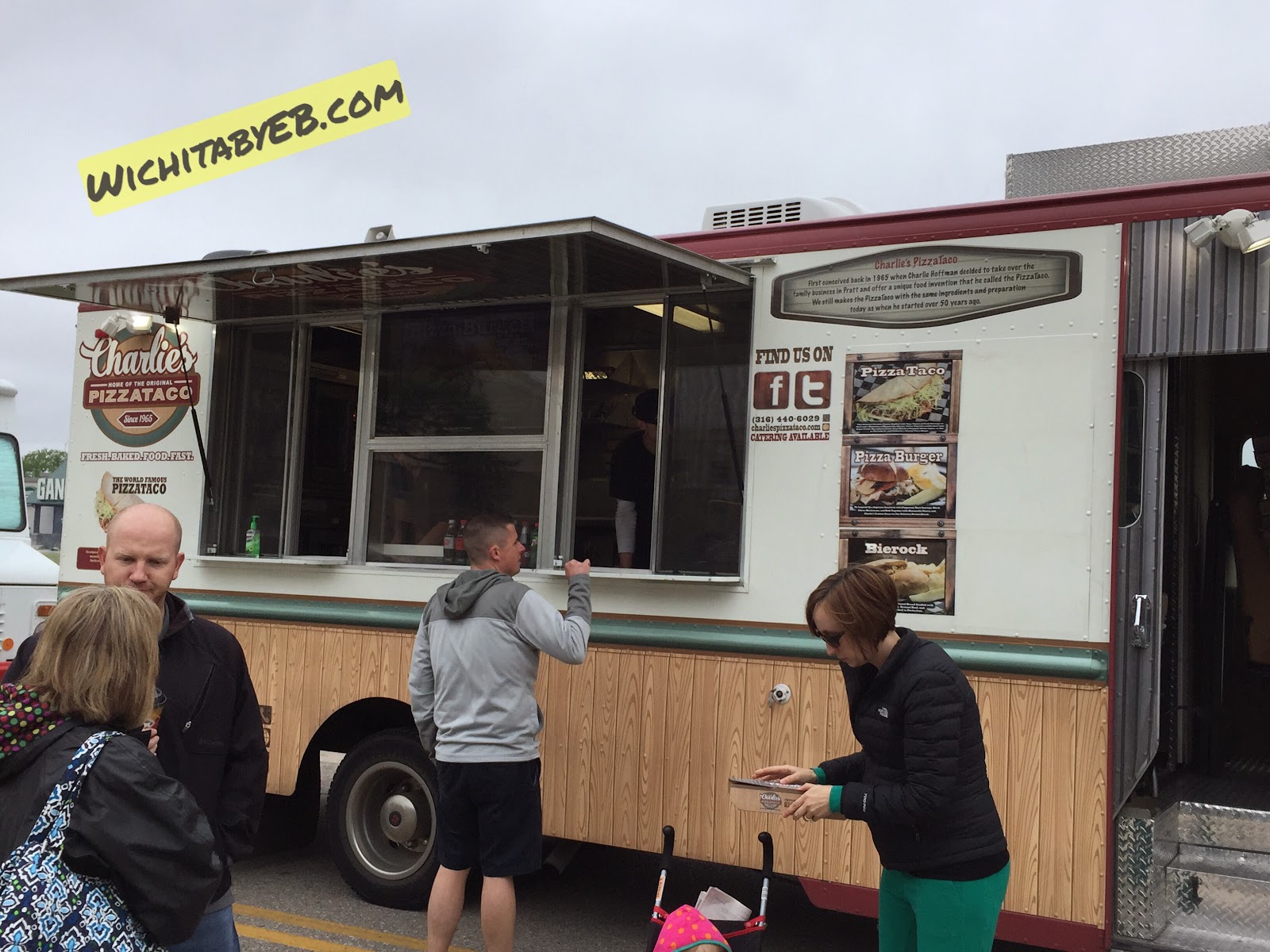 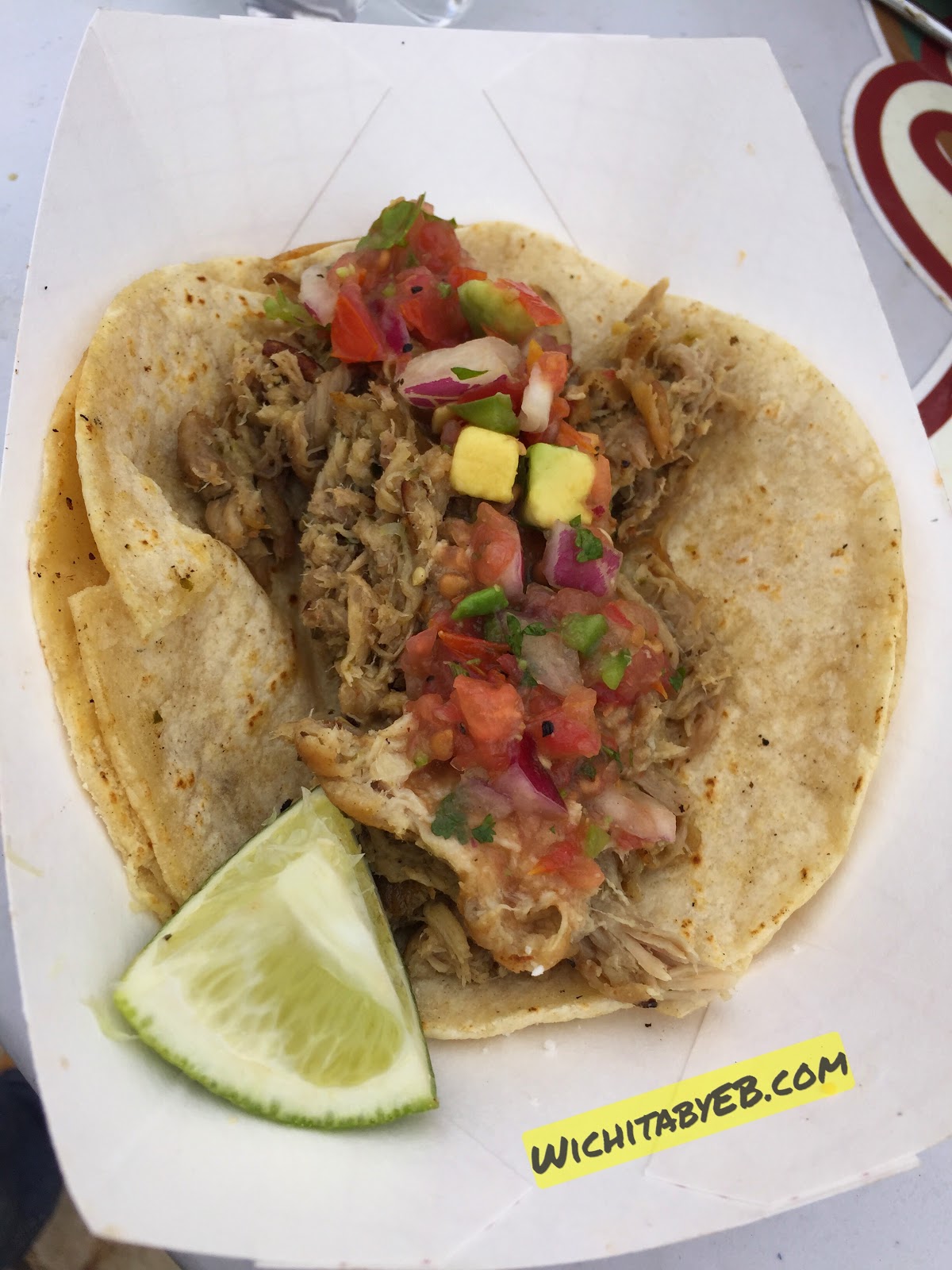 The second truck we went to was Charlie’s Pizza Taco. We both split a pizza taco and a bierock there. Please note that the pizza taco’s there are not made to order on hand. When we ordered our food, I tried to order mine with no cheese and was told they were all premade and cooked at the truck. 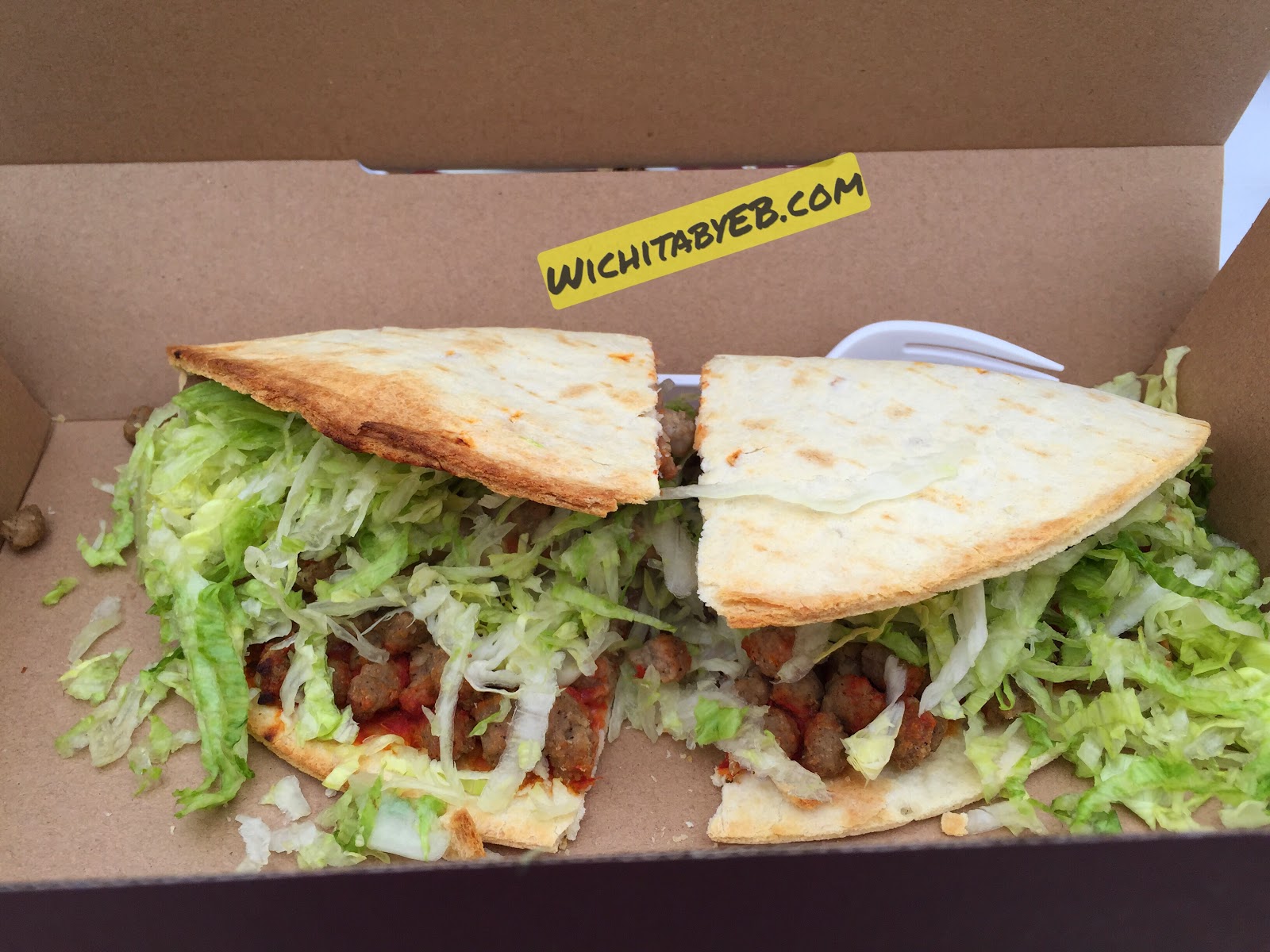 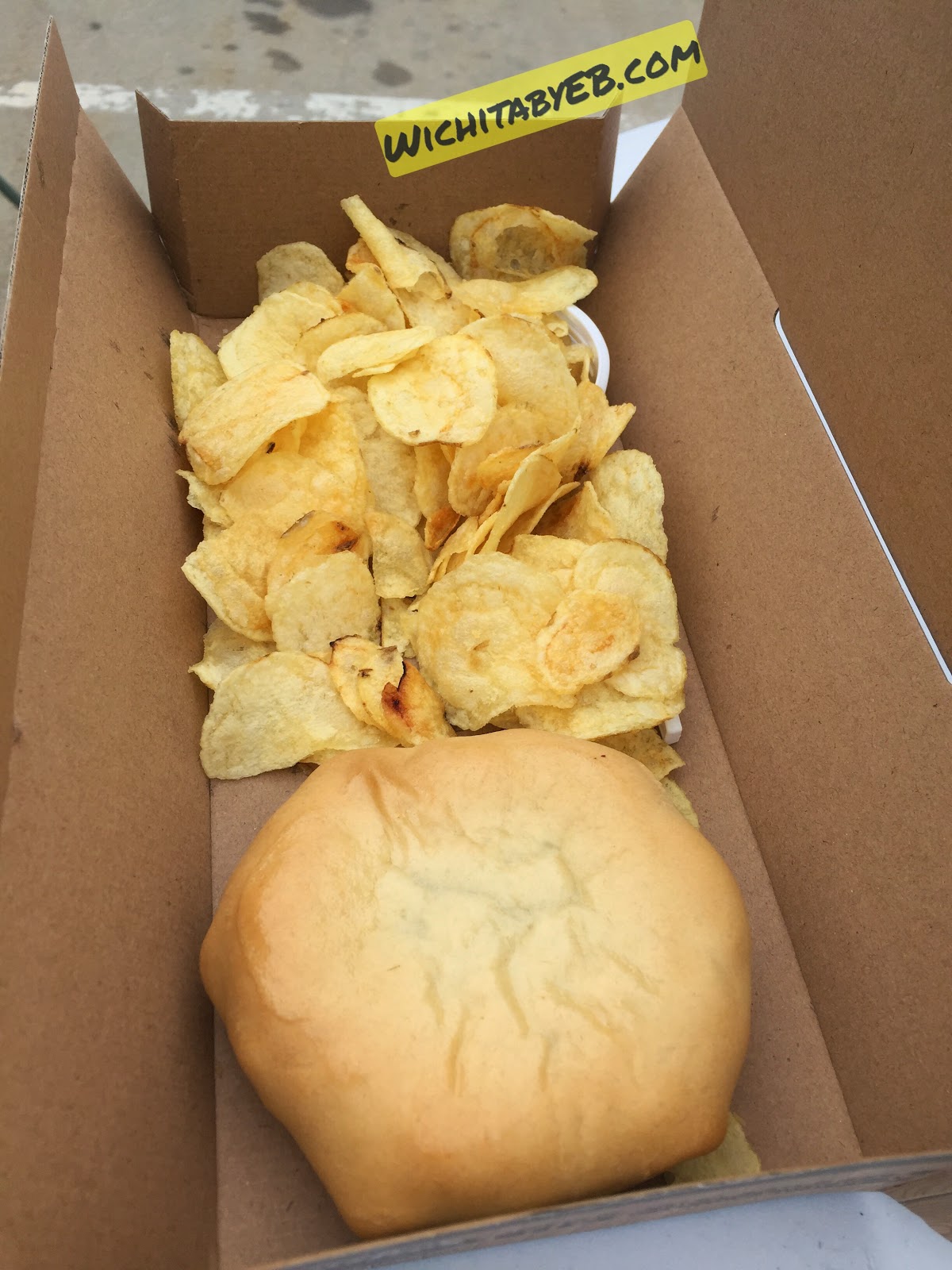 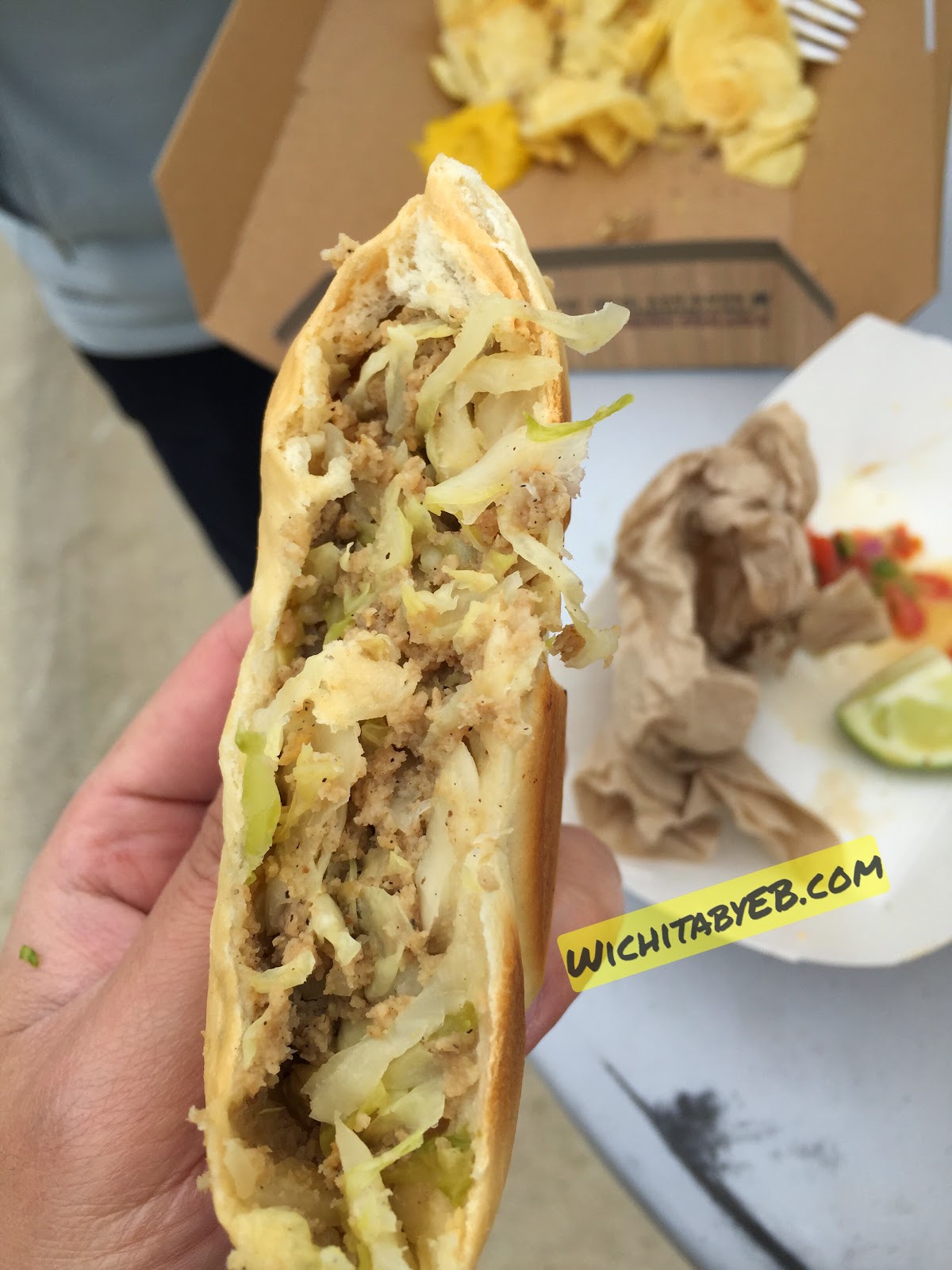 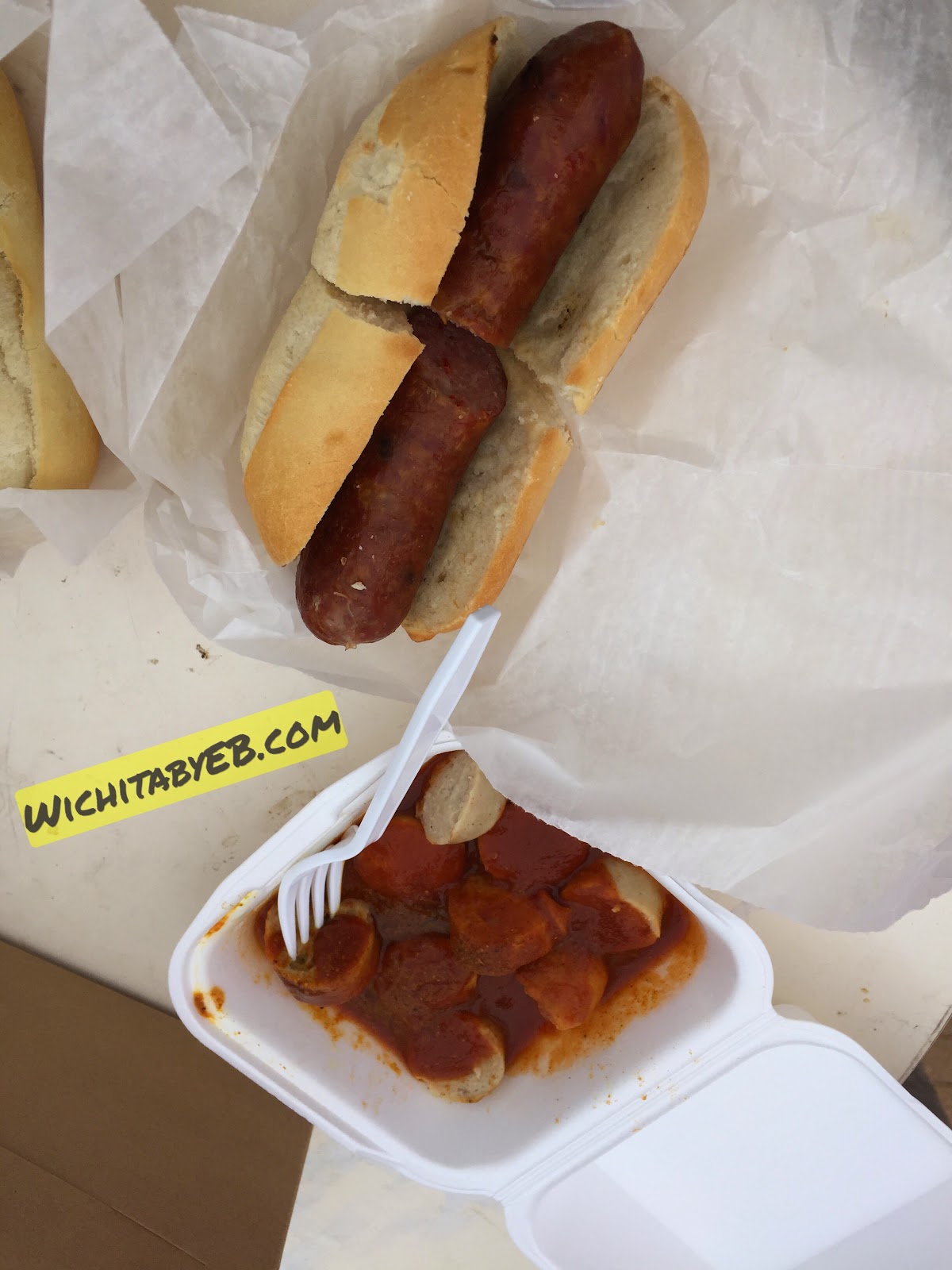 For the third truck, we went to Let’m Eat Brats because let’s face it. If you’re outside and there’s a food truck around, you HAVE to get a dog. It’s the American way. At Let’m Eat Brats, we went with the Currywurst (a Weisswurst sliced and covered in a ketchup/curry sauce) and an Andouille (a smoked Cajun style sausage).
Of the three trucks we visited, the best food we had by a long margin was Chino’s Parrilla. If my stomach gave me the option of going to a fourth truck, I would have gone back. In second for us was Let’m Eat Brats. The Currywurst brat is an interesting option if you like curry; our first recommendation would be to cut down on the ketchup. The ketchup/curry sauce tasted more like ketchup than anything. Then in third was Charlie’s Pizza Taco. The bierock was pretty decent but the actual taco pizza didn’t have much flavor to it if you didn’t add any of the sauces they had on hand. It was the priciest of all the food trucks we stopped by. If I go back, I’m not sure if Charlie’s Pizza Taco would be on the return visit.
On the way out my buddy wanted to pick up some cupcakes for him and his fiancé so we made a quick stop by Brown Box Baker and he picked up the Bugs Bunny, PB.J, New Yorker and Strawberry Margarita. He wanted me to note that the New Yorker was the favorite of the four between him and his fiancé. For those wondering, the cupcakes there are $3 apiece.

For the April event, they even had a free Yoga session that started earlier that morning. I had to pass on it. I’ve done yoga a couple times and have even tried hot yoga. Do not be like me and ever make fun of it. It is TOUGH and NOT easy. Pretty much, hot yoga kicked my butt. I almost wrote a blog about my first hot yoga experience at a local place here in Wichita but the sweat from my hand that particular evening would have messed up my laptop.

As for the Food Trucks at the Fountains, outside of the windy brisk weather it was a great time. It’s great concept and something everybody should try at least once. Take a friend, take your family, or just bring yourself. If the always questionable Wichita weather cooperates it could be a great time. Next step would be to allow for a Bloody Mary and Mimosa Food Truck that afternoon; then it’d be a goldmine of an idea!

If readers could bring back one restaurant, which one would it be?