In preparation for this big amazing holiday, I figured it would only be fair to bring you all to the place where the best Root Beer is served. And when I say you all, I meant taking Cylee and Bella to try something I find to be dangerously delicious.

If you don’t know by now, Nu Way has the best root beer in town. No question. If “Crumbly Is Good” than “Root Beer is Better”.

While I’m a fan of many of the offerings at Nu Way, there is one thing I’ll always have while I’m there and it’s their Root Beer. This past weekend, I wanted to introduce Cylee and Bella to a place their parents have never taken them to. Oddly enough, Bella has never had a Root Beer Float before so it only made sense that her horrible influence of an uncle introduced her to more not so healthy things.

If you’ve never been to Nu Way, don’t fret. There are plenty of locations to choose from. Just check out their website for more details.

You can also purchase 2 liters of their Root Beer for $2.99. I just happened to buy a few to surprise my co-workers with on National Root Beer Float Day so hopefully they aren’t reading this too early to ruin the surprise.

So for the next installment in the “Must Try Menu Item” series, I bring you these beauties: 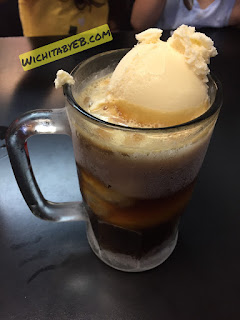 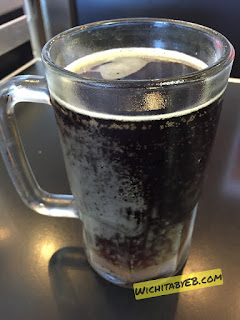 I’ve had some good Root Beer in town but nothing compares to the mouth watering, thirst quenching goodness at NuWay.

When Cylee and Bella were given one Root Beer Float to share, they were unsure of what to do. I had them drink some of the Root Beer first to get their opinions. I was given comments such as “So delicious”, “it tastes like what daddy drinks”, and “Can I try what you’re drinking?”

Then I gave them spoons to try the ice cream with the Root Beer and was able to gather more opinions like “this is better”, “I love ice cream!” and “Can I try what you’re drinking?”

If the table could talk, I would have asked its opinion because the table seemed to get a lot of ice cream on it too.

Both girls really dug the Root Beer Floats and finished it fairly quickly with a large mess and the occasional bickering because one girl’s spoon was taking too long in the mug while the other had to wait. I let it slide. I’m not here to teach them obedience and discipline. I’m just here to spoil them and let them spend my money.

When they finished their Root Beer Float, I finally let them have some of my Root Beer and the couldn’t get enough of it.

If you’ve never had the Root Beer or Root Beer Float at NuWay, this is your notice. Get over there and get some. It’s probably the best alcohol free beverage out there.

Otherwise, I hope this helps you all out. Happy Dining!