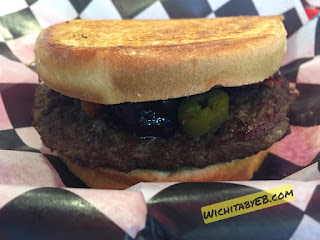 On Friday, Spangles officially rolled out their Peanut Butter Steakburger with bacon and jalapenos.

To the average person, the thought of peanut butter and jelly on a hamburger may bring on a look of disgust or confusion. To me, it grabs my attention and will give me a reason to eat out.

The newest creation by Dale Stephen, one of the founders of Spangles, puts together a 1/3 pound Black Angus steak burger, crunch peanut butter, grape jelly, bacon, and jalapenos all packed in between a soft sourdough bun. You can now get them at your nearest Spangles for $5.49 or in a combo for $7.45.

Now don’t get me wrong, this new creation brought on a weird look from me at first but my rationale is, you don’t know it until you try it. Let’s look at it from this standpoint, the person who originally put peanut butter and jelly together may not have been the most popular person around. People may have thought it was gross. When someone decided to put waffles and chickens together, people may have winced at the thought. Like most foods, I will always reserve judgment until I actually try it.

A friend on Facebook posted to me that they have something like this in Nebraska and it’s actually delicious. Other people I talked to about it, thought it was crazy and would never go. Since I love trying new things and am never afraid to give an honest opinion, it’s best I try it myself.

Two of my colleagues and I stopped by Spangles for lunch with full intentions of trying out the newest creation with an open mind. These guys also tried the Pizza Hut Hot Dog Bites Pizza so they were totally open to joining me.

The burger came out fresh and as their jingles states “freshness made to order”. The original look of the burger was not disgusting at all, it actually looked appetizing. Then came the moment of truth with the first few bites. Upon those first few bites, it was mentioned by everybody that the peanut butter really stood out. First of all, crunchy peanut butter is the best and it worked great with the burger especially the sourdough bun; any other bun it wouldn’t have worked well with.

One colleague said he thought it was much better than the  Pizza Hut Hot Dog Bites Pizza. It was a burger he would order again. He finished his burger the quickest of all of us and commented that it was better than he would have thought. My other colleague was a big fan and intends on taking his son there this weekend. He said his son loves crazy combinations like this and would love to try it.

I liked it. Even after recently completing eating 30 burgers for my quest to find the Best Burger in Wichita, I was able to make room for this food combination one would think they could only find in a fair. But nope, you could get this at your nearest Spangles. I don’t regret the decision at all and felt find after eating the burger. I read so many comments about “You will need to Pepcid AC” or “You’ll get heartburn”. Not for me; I was fine and thoroughly enjoyed the burger.

If you like peanut butter and jelly sandwiches, you really have to give this a try. The jalapenos add the right level of spiciness if you like spicy. If not, order it without the jalapenos.

The three of us who went were all surprised with how good the burger was and would all try it again in a heartbeat. The peanut butter really makes this burger. I was told that they tried all sorts of peanut butter to make it work and eventually came across this peanut butter and it was a hit.

To top things off, we tried all the seasoned fries options available at Spangles. I’m a big fan of Spangles fries especially after a night out on the town but have never given the seasoned fries a chance. I didn’t want to mess with a good thing. The seasoning for the fries are all free and there are four to choose from: Garlic Parmesan, Salt & Vinegar, Ranch or Buffalo.

Wow. the ranch fries are really good; at least in my opinion. Of the four, the other two favorites among the group were Salt & Vinegar and the Buffalo. 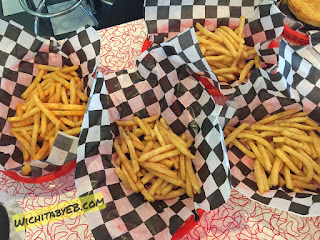 So that’s it for the newest burger in Wichita.

According to Spangles Facebook page, you can now get a Free Peanut Butter Shake with the purchase of their Peanut Butter & Jelly Steakburger. This is only available on 6/26.

Seriously, don’t give in to the negative comments you may have read about the burger or your initial gut reaction to seeing it. I have yet to read a review on it from someone who has actually tried it themselves. Give it a try yourself and see if you like it. Let your taste buds be the judgment on whether it’s a quick fad or the real deal.